Our showroom is currently closed due to Covid-19 restrictions. Please contact us at 02 9283 4375 or sales@nightvision.com.au

We would like to present you an article, written by our friend Phil Tailor. In which he reviews our thermal imaging binoculars Accolade 2 LRF XP50 after a brief time on hands. Enjoy!

I’ve been using a set of Pulsar Accolade binoculars now for nearly 2 years, before that I was using a Helion XP50 & although this was a fantastic unit, once I made the jump to the Accolade I found them much better. The Accolade with the 2 screens are so eye friendly, I used to find some nights with a monocular that when you have been sat there scanning for a while & you go to switch to your night vision, your eye would take a good few seconds to readjust to the darkness. This isn’t an issue I’ve found with the Accolade as you can switch straight to your chosen NV with no issue.

So, after a good 18 months use with my original Accolade, I was given (on loan) a set of Accolade 2 XP50 LRF to try out & use for a few weeks. Of course nothing is ever 100% spot on for everyone & improvements can always be found that is why we end up with newer models. I’ve never found too many negatives with either model. To look at the new Accolade 2 there is no difference when side by side with the older ones there is no blue button as on the new Helion 2 & Pulsar Trail 2, all the improvements are inside the unit.
Like any binoculars the Accolade works the same, you have your centre lens focus wheel as well as diopter adjustment for your eyes to bring them into focus &, unlike traditional binoculars that pivot in half to get your eye width, these have width adjustable eye cups which allow you to set them to your own eye width, but they’re stiff enough to not knock them & have to keep on adjusting them.

The major upgrade to the new unit is via Pulsar’s new Sensor which they have had made especially for them, the old unit had a 640×480 @17 pm NETD <50 mk sensor and the new unit boasts the new 640×480 @17 pm NETD <40 mk sensor, this really does come into its own on those damp or misty nights that really affect the thermal image & it’s hard to pick up the heat source. The lower the NETD <mk number, the better the picture quality gets on those hard nights or early mornings when the weather has been bad all night or day and this, along with the image boost technology working together it really does enhance that picture. I’ve popped a picture below of the difference between the 50 mk and 40 mk sensor and also pictures of image boost difference. 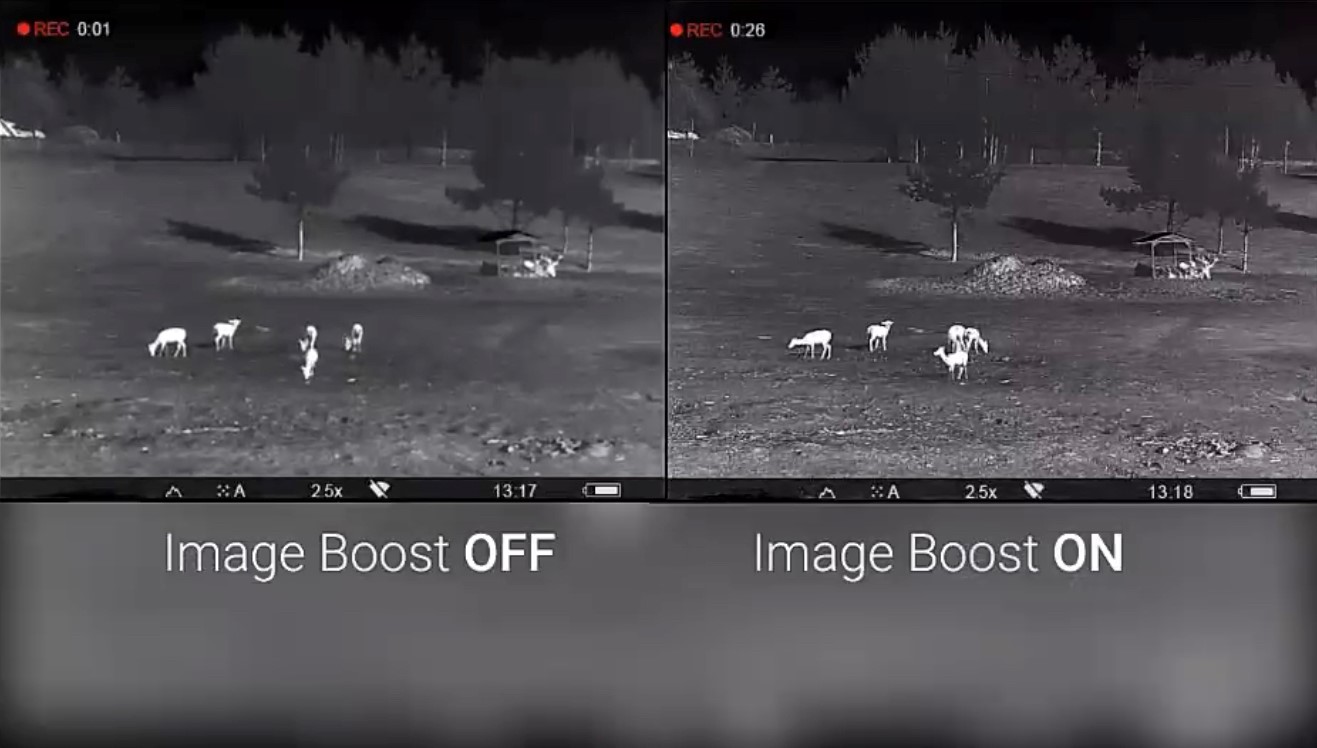 The next upgrade comes via the internal memory of the unit, the older unit has a built in 8 GB of memory and the new unit this boasts double the internal memory at 16 GB, which allows you to record up to 8 hours + of video footage or 100,000 pictures. I think that is more than enough for any modern day hunter. My first down side is that this records video in .avi format (audio video interleave) which is a pain if you want to share this straight to social media platforms. However, on the Stream Vision app there is now an option to convert the file on Android this converts to a MP4 file, but on Apple devices this converts to a MOV file both can easily be shared via social media (but it is an extra process). Also, with your downloaded video on Apple devices, when playing back on the Stream Vision app there is no sound however, once you covert it and save it to your iPad/ iPhone there is sound again there doesn’t seem to be an issue with Android devices, I know Pulsar are working on this to resolve it so, fingers crossed, in the next firmware updates this will be fixed. Also, it’s a shame that you don’t get the image/ clarity on your videos that you see through the eye piece in real time, as it’s only recording in 640×480 resolution.

IPX7 waterproof is fantastic and means that you don’t have to worry about what weather you take your device out in. IPX7 means that it has been tested in 1 metre of water for 30 minutes. I don’t think any of us plan to go swimming with them, but it does give us peace of mind that come rain or snow, we’re not going to have issues or if we fall into a bog whilst out stalking. 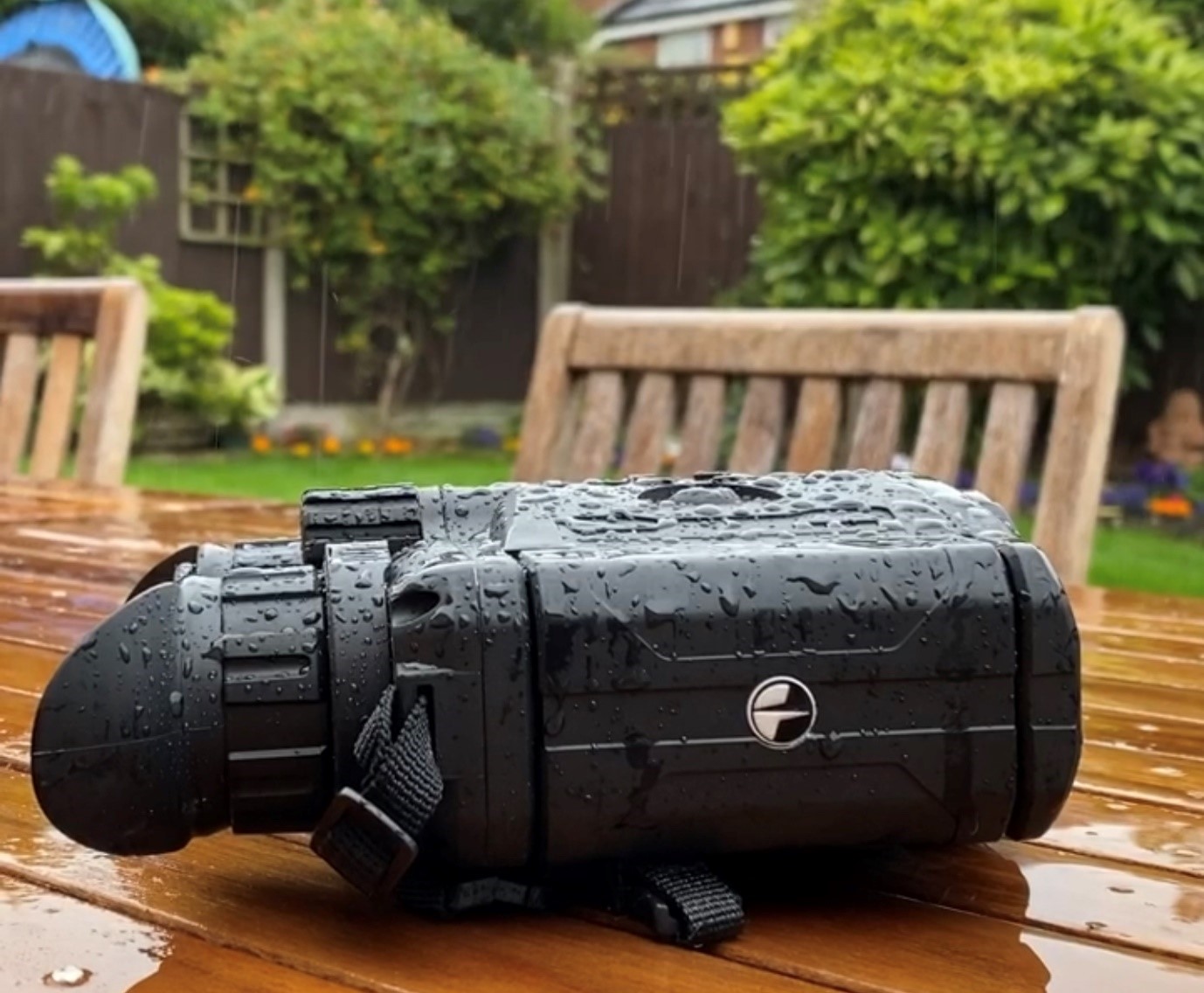 The laser range finder is another cracking feature on the LRF model of the Accolade, with a maximum distance range of a 1,000 metres which can also be turned to yards if that’s your chosen measuring unit. In the settings there are also 3 options to adjust the rangefinder reticle to which suits you and your eye the best and depending on if you prefer thicker or finer reticle. Two other handy options in the rangefinder menu (in main menu) which can be turned on are target angle position & THD true horizontal distance, which on uneven ground & hills would be another helpful option to utilise. 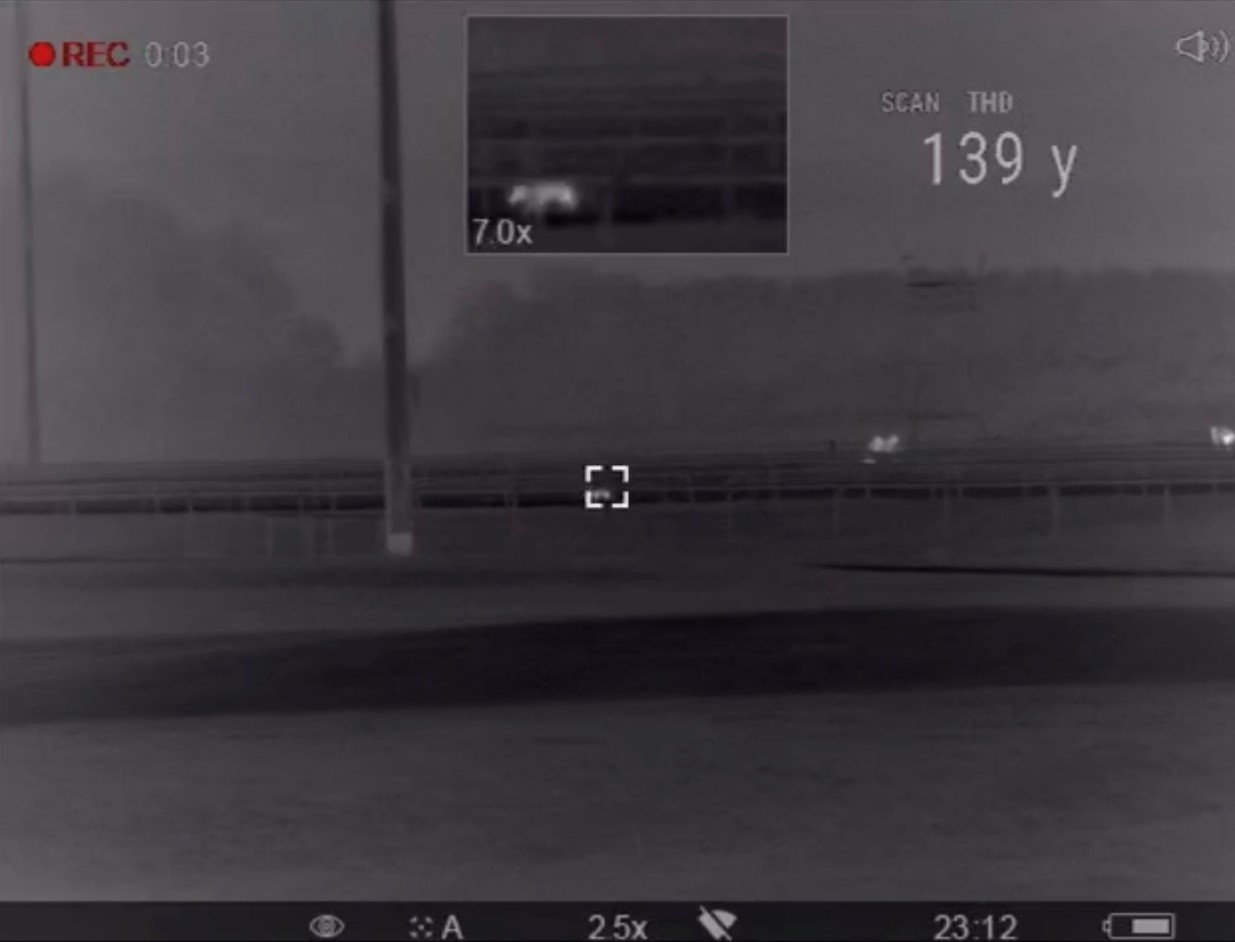 Another great upgrade from the old Accolade is the upgraded battery, they have taken it from the old Li-lon IPS5 battery to the newer IPS7 battery this is giving you an extra hour or so use for the hardened user (7-8 hours use). Obviously with everything extra going on with the Accolade you’re not getting the battery life of the Helion 2 which is around 10 hours. There is also the option of buying a spare upgraded battery with extended life which is the newer IPS14 which should see you get somewhere around 14-16 hours use out of the Accolade.

Another thing I like very much about the Accolade & I think Pulsar have spot on is the menu features, a lot of people that would upgrade to the Accolade would probably come from using the Helion as this would be the next natural progression in your thermal experience & the same menu is transferred between both models, although with the Accolade the menu buttons are set out slightly different, the buttons do the same things which is great when you’re already used to the menu features.

In my opinion, the base magnification on the XP50 model is great, starting at 2.5 & going up to 20 mag with the added bonus, should you wish to use it, of the Picture in Picture option which is turned on in the main menu. The Picture in Picture at base mag sits there at 5 mag & you can quickly increase that x5 x10 x20 with the up and down buttons. As with any digital mag, the higher you take it, the more pixelated the image becomes but you can also set your PIP at your desired mag, going up in increments of .1 at a time via the quick menu, so you can have the best of both worlds with your main image at 2.5 for super clarity & your PIP sat where you’re comfortable with it. 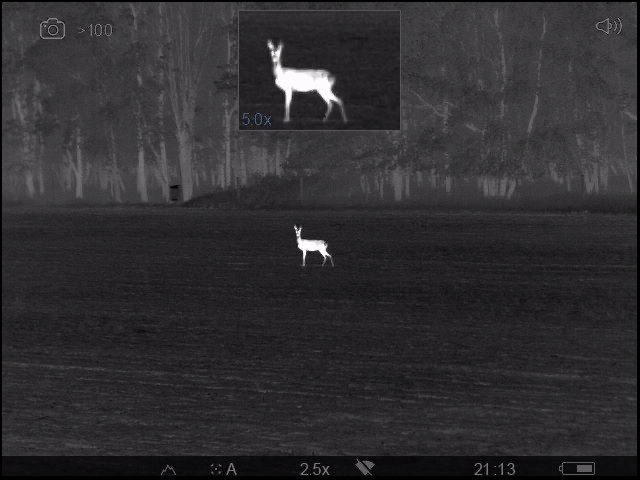 Much to my delight, I will not be sending the new Accolade 2 XP50 LRF back, I loved them so much I’ve now purchased them & sold my old set on to a good home. The new NETD <40 mk sensor makes one hell of a difference in my eyes, the nights where you’ve had rain or it’s raining is really where it helps you out. For anyone that uses thermal, you will know how much of a difference it makes to the image with moisture in the air & on the ground. As I said above the new Accolade 2 is £600 cheaper than the old model so what is not to like about new technology at a lower RRP. If anyone lives around the midlands & wants to have a look through the new Accolade 2 XP50 LRF, please feel free to pop me a message & we can try to meet up & you can have a play with them before you treat yourselves. 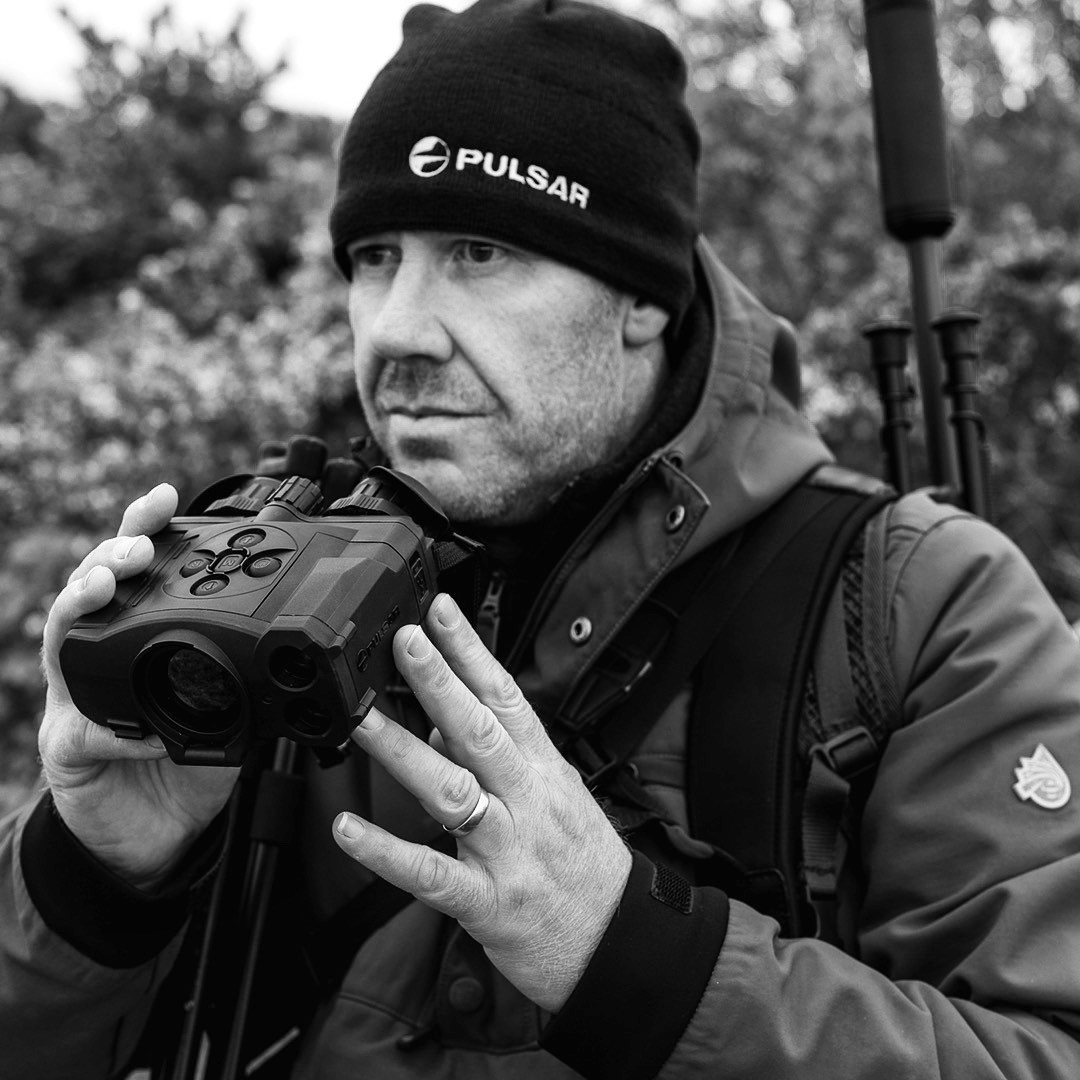