Our showroom is currently closed due to Covid-19 restrictions. Please contact us at 02 9283 4375 or sales@nightvision.com.au 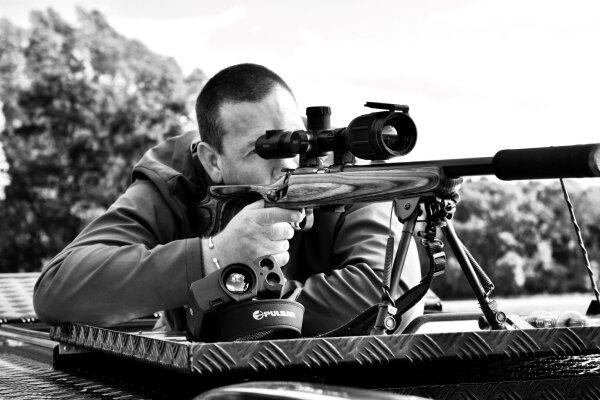 This is my 1st look into a thermal scope, although I have been using thermal for spotting now for the last 3 years + starting off with the Helion, then upgrading to the original Accolade & now to the Accolade 2 XP50 LRF I’ve looked through friends Apex thermal scope & also Trail scopes but never used 1 myself properly until now.

I’ve had this Thermion XP50 on loan from Pulsar now for 2 months. My 1st impression when taking it out of the box was wow, these are the sort of products we have come to expect from a premium brand like Pulsar.

Compared to previous thermal scopes I’ve looked at & used for a hour here & there this is just like a normal day scope in size & fits on normal 30 mm rings which in my eyes is a fantastic idea. It’s not at all bulky & very well thought out with 3 buttons on top rear of the scope & your main menu button & adjuster wheel on the side of the scope where your normal side parallax adjustment would be, on top of the scope where your elevation turret would be they have very cleverly put the external battery & on the right side where your left & right movement would be on a day scope is your USB port for charging & data transfer.

On the front of the scope you have your focus adjustment & like normal scopes you also have a diopter adjustment on the rear of the scope. The Thermion XP50 has a high recoil rating up to .375 H&H so it will cope with everything you throw at it. 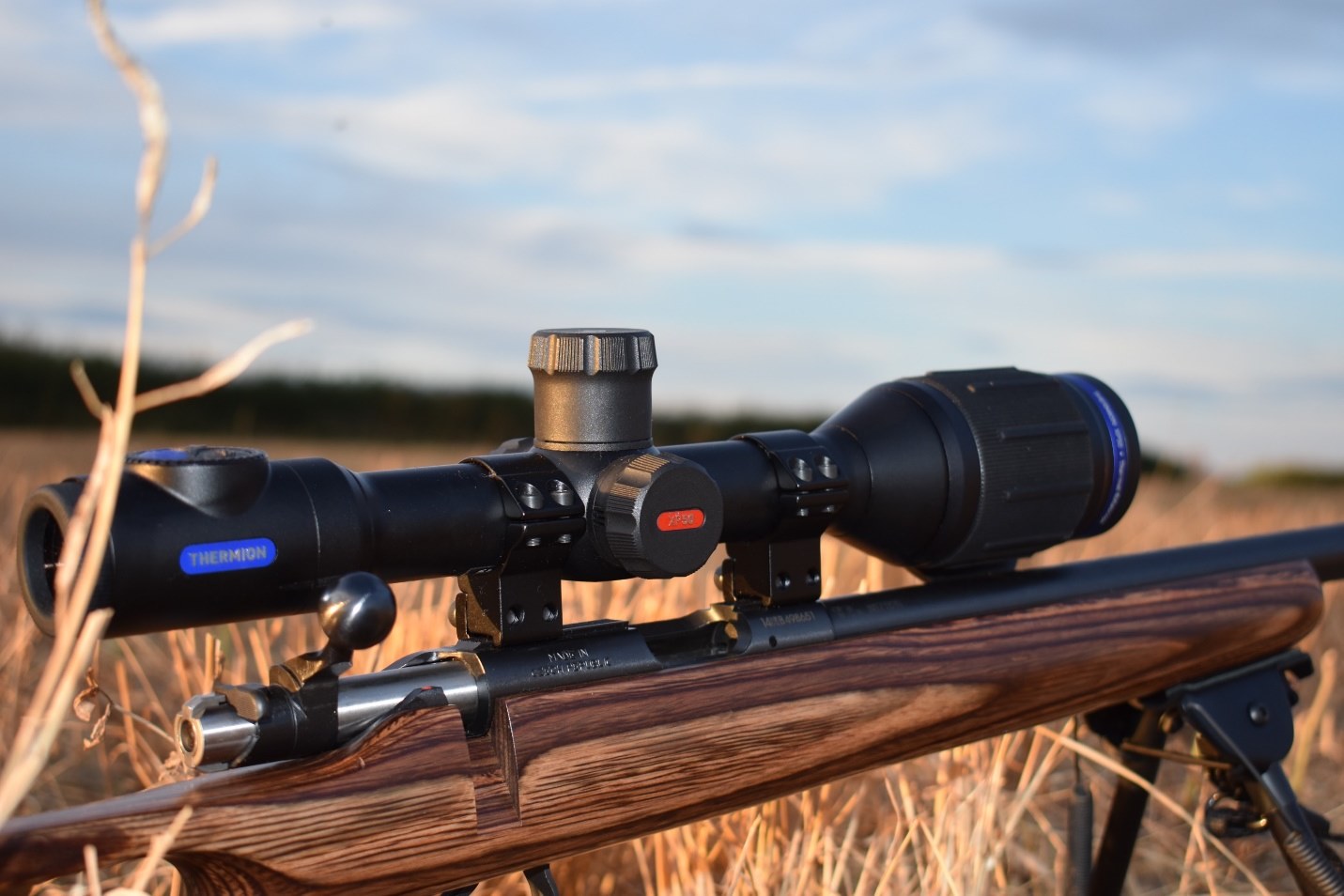 I was a tad nervous at first wondering how easy this would be to zero, I’m glad to say I was pleasantly surprised. The 1 shot Zero is a great feature on the range of Pulsar Night Vision & Thermal scopes. Although I didn’t manage the 1 shot zero it took me 3 (but it was my 1st time using this feature) I would be fairly confident the next time I have to use this option it will only take me 1 shot & then 1 to confirm zero. You can use 1 of 2 methods for a target both I have found work well, you can either fold some tin foil into a small 1” square & slightly angle it up at the sky so it absorbs the heat or you can do as I did, pop to your local chemist & buy some heat pads which are inexpensive. Either fold this into 4 or as I did, cut it in half then just fold it into 2 to create a 1” square target, this gave off a fantastic heat glow. I’m sure someone probably makes special heat pads for this purpose in the shooting world, but I’ve not found them as of yet. When you come to zero you can set 5 different zero distances on the scope A, B, C, D or E or it means you could set it up for 5 different rifles in the profiles. 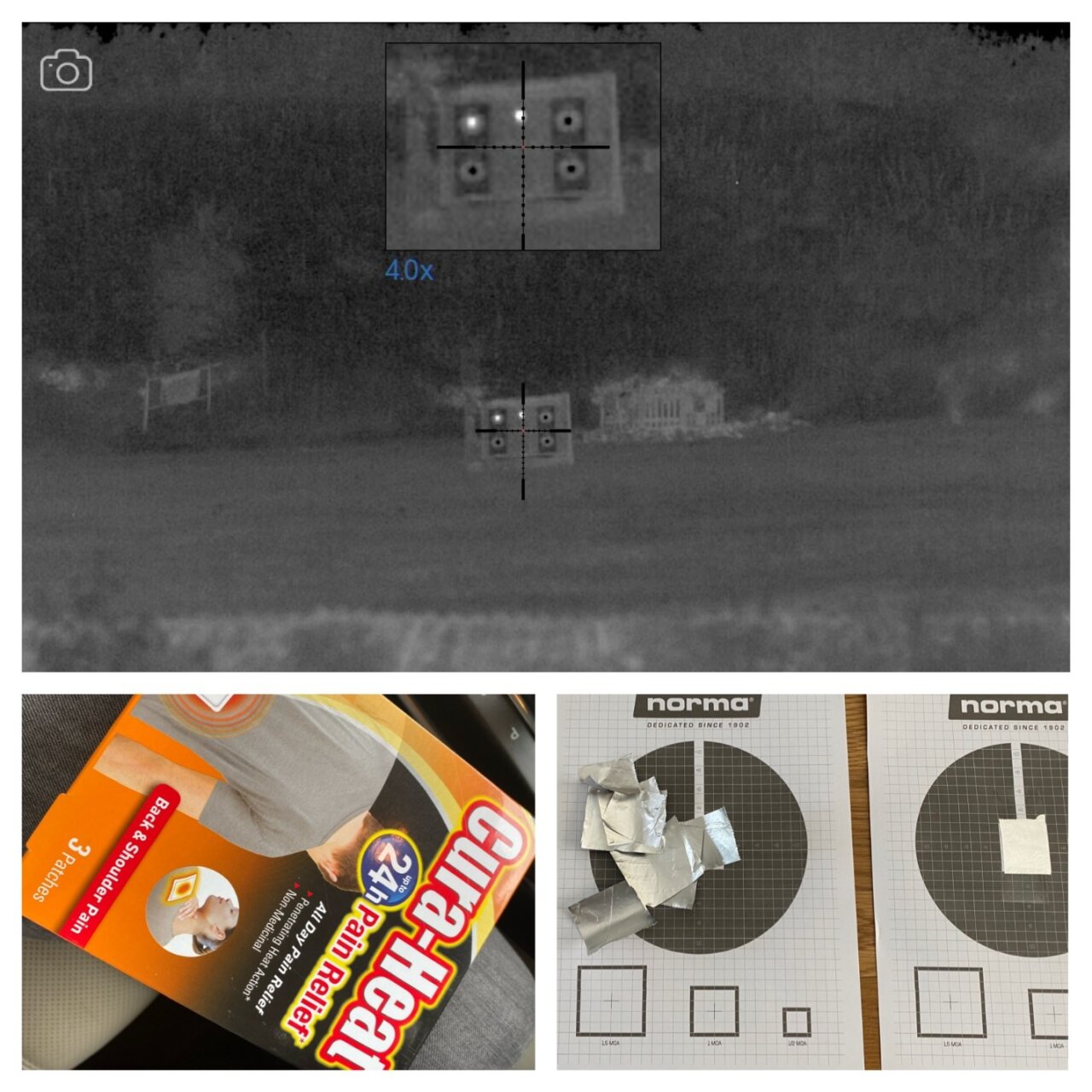 There has been lots of talk in the last couple of months about the latest Thermal sensor fitted in the new 2nd generation models in the Pulsar range. The new 640×480 17um NETD <40mk sensor has been fitted in the Thermion XP50 for a while now. In some models of the Thermion you get a 384×288 17um & 320×240 12um sensor, but they all have a 50 Hz refresh rate. The field of view in the top of the range boasts a massive 12.4o FOV, other models are 4.4o FOV upwards.

The view finders are the same in all models, HD AMOLED 1024×768 so you’re getting super crisp images in real time through the eye piece, I was totally shocked at the difference between the AMOLED 640×480 screen of my Accolades in comparison to the screen in the Thermion. Other Pulsar models when you’re recording your only getting 640×480 resolution and it’s does downgrade the image compared to what you’re seeing in real time, but with the Thermion it’s recording in 1024×768 resolution. Your built-in memory is 16 Gb which will record more than enough stills or video for any hunter out there.

Moving on to battery life, there is a built in APS3 & a removable APS2 battery.

Moving on to battery life, there is a built in APS3 & a removable APS2 battery. From a full charge you will get around 4-5 hours use in total and you can either put your scope in sleep mode by pressing the power button or you can turn it off in between shots as it has a super quick start up time, but sleep mode will extend battery life. I did find that if you’re out for a big evening/night session you would be better off carrying a spare battery with you just in case as there would be nothing worse than running out of power when you have something in the crosshairs. Spare batteries are affordable the APS2 comes in at £35.95 & the extended life APS3 £39.95. With the Thermion scopes there is an extended turret cap included when you buy it to fit the extended APS3 battery, you also get the dual APS battery charger to charge 2 batteries at the same time, or you can plug your Thermion straight into the power source via the data cable supplied with the charger & charge it from there. Also in the box, should you wish to use it, is an extended rubber eye piece, which is handy when using it on larger calibers.

As with all of the Pulsar range, the Thermion XP50 scope is IPX7 waterproof which means you will never have to worry about being caught out in the worst of weather conditions because Pulsar have you covered with this. IPX7 means it can be in 1 meter of water for up to 30 minutes, so even the worst of weather isn’t going to throw enough at this scope to get it worried.

Along with a lot of the Pulsar range the Thermion Xp50 range comes with 8 colour pallets white hot, black hot, red hot, red monochrome, rainbow, ultramarine, violet & sepia. Depending on the conditions, that you’re out in it is always worth checking between colour pallets to see what suits the conditions better. 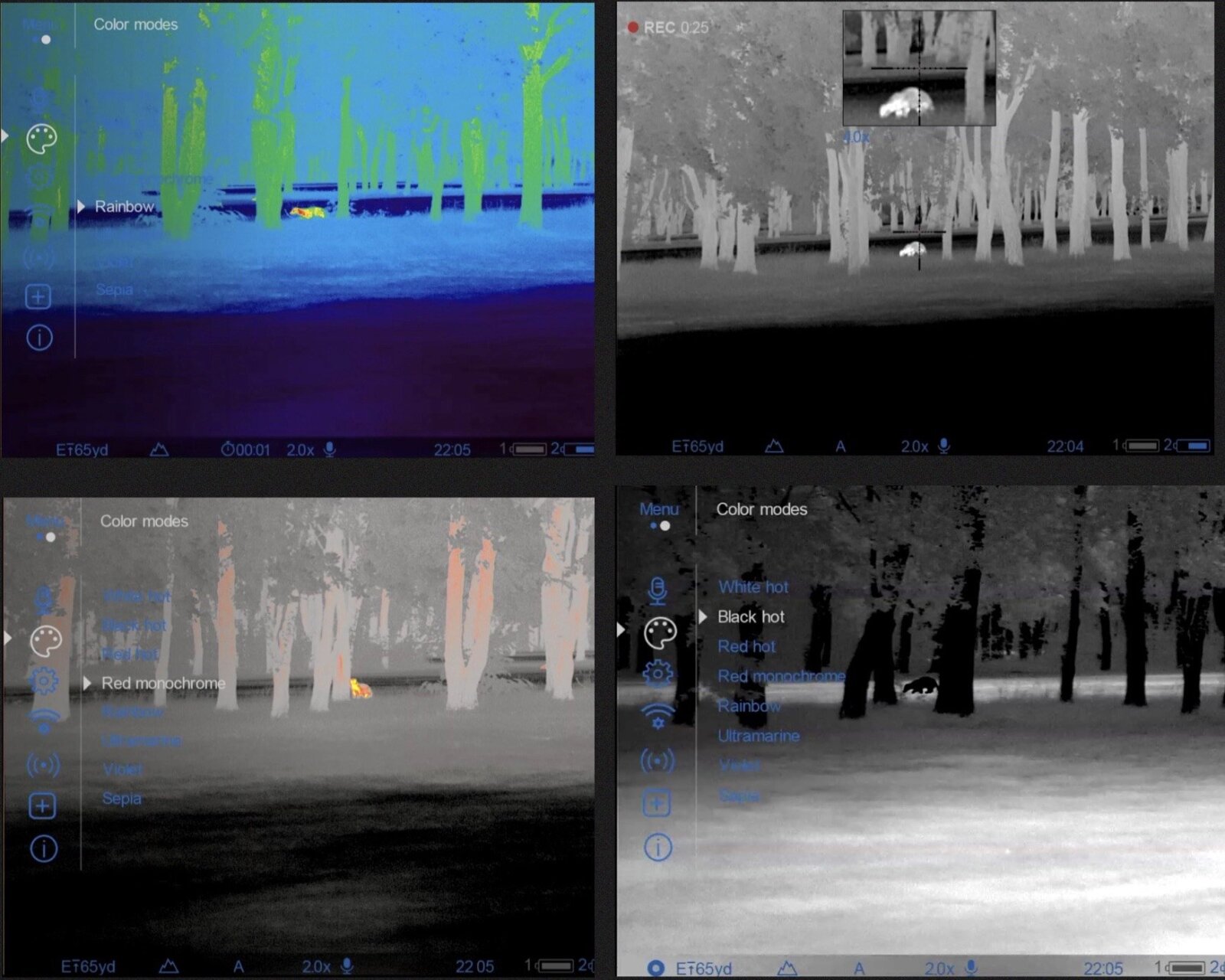 Picture in Picture (PiP) is worth its weight in gold with the Thermion & any other night vision or thermal scopes, this can be turned on by holding down the + button for a few seconds. PIP mode comes into its own when you’re taking a shot & you want to make sure you’re being precise with your shot placement as it not always easy to see on the lesser magnification in the home screen. 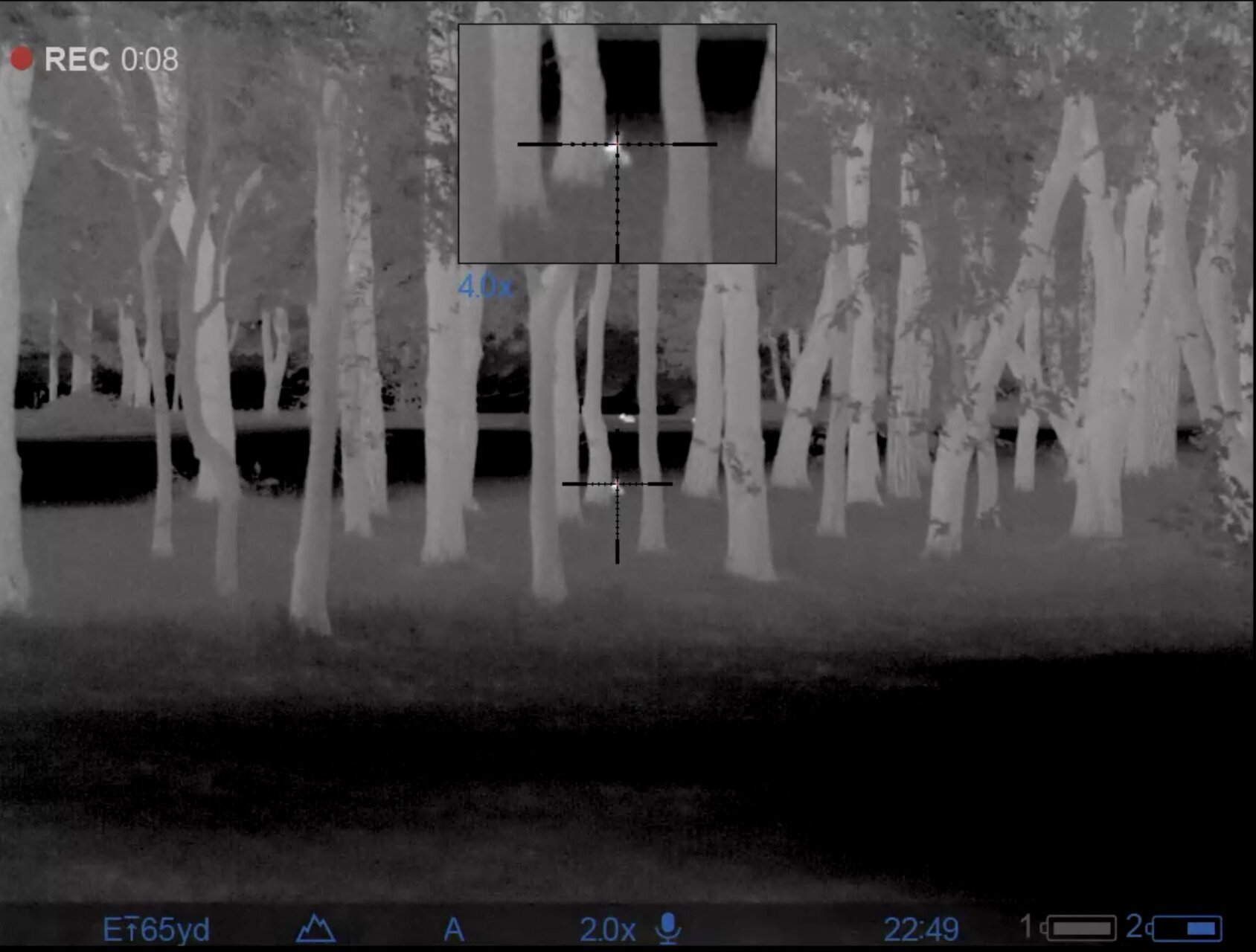 With the latest Firmware updates this has introduced not only Image Boost technology but also an extra observation mode which is custom, this allows you to set up your scope or spotter to your own custom settings & this will keep these in the memory. The Image Boost technology is fantastic as it sharpens everything up & makes it nice and crisp, there are lots of videos on YouTube showing the differences with image boost on & off.

The Stream Vision app is also great if you’re out with a buddy shooting, it means you can stream what you’re looking at in the scope to a phone or tablet which keeps your buddy involved as well. You can also review any of your recorded video or stills on the Stream Vision app which keeps all of your footage together once you’ve downloaded it from the scope. The other way of downloading your footage is via the data cable, which you also use to charge the unit directly. You can simply plug that into your laptop & download the footage directly for those that prefer to watch & edit their footage on a laptop rather than a tablet. Again I had a few issues with Apple products as the Thermion records in MP4 format & Apple uses MOV files, it meant that I could watch them Via the Stream Vision app but I couldn’t do anything else with them such as share on Facebook etc, but downloading straight to a laptop resulted in no issues at all.

You can simply plug that into your laptop & download the footage directly for those that prefer to watch & edit their footage on a laptop rather than a tablet.

As I said at the start of this review this was my 1st proper look at a thermal scope, what did I think?

I loved it, the clarity you’re getting with the 1024 x 768 screen in the Thermion is fantastic, it takes it to the next level again. Would I buy one? yes I would. It’s easy to use, easy to zero,
fits on 30 mm rings, what is not to like? The only niggles that I could really find were, Pulsar & Apple not working as they should side by side with downloading the footage & being able to share it, The battery life I feel a spare battery is a 100% must have as you don’t want to be caught high & dry although they’re not silly money, & finally the focus on the front of the scope can be a slight pain if you’re tracking something moving in & you’ve got your rifle up on shooting sticks, reaching all the way forward can be a pain until you get used to it. All in all though in my opinion I think Pulsar have created another fantastic product with the Thermion. 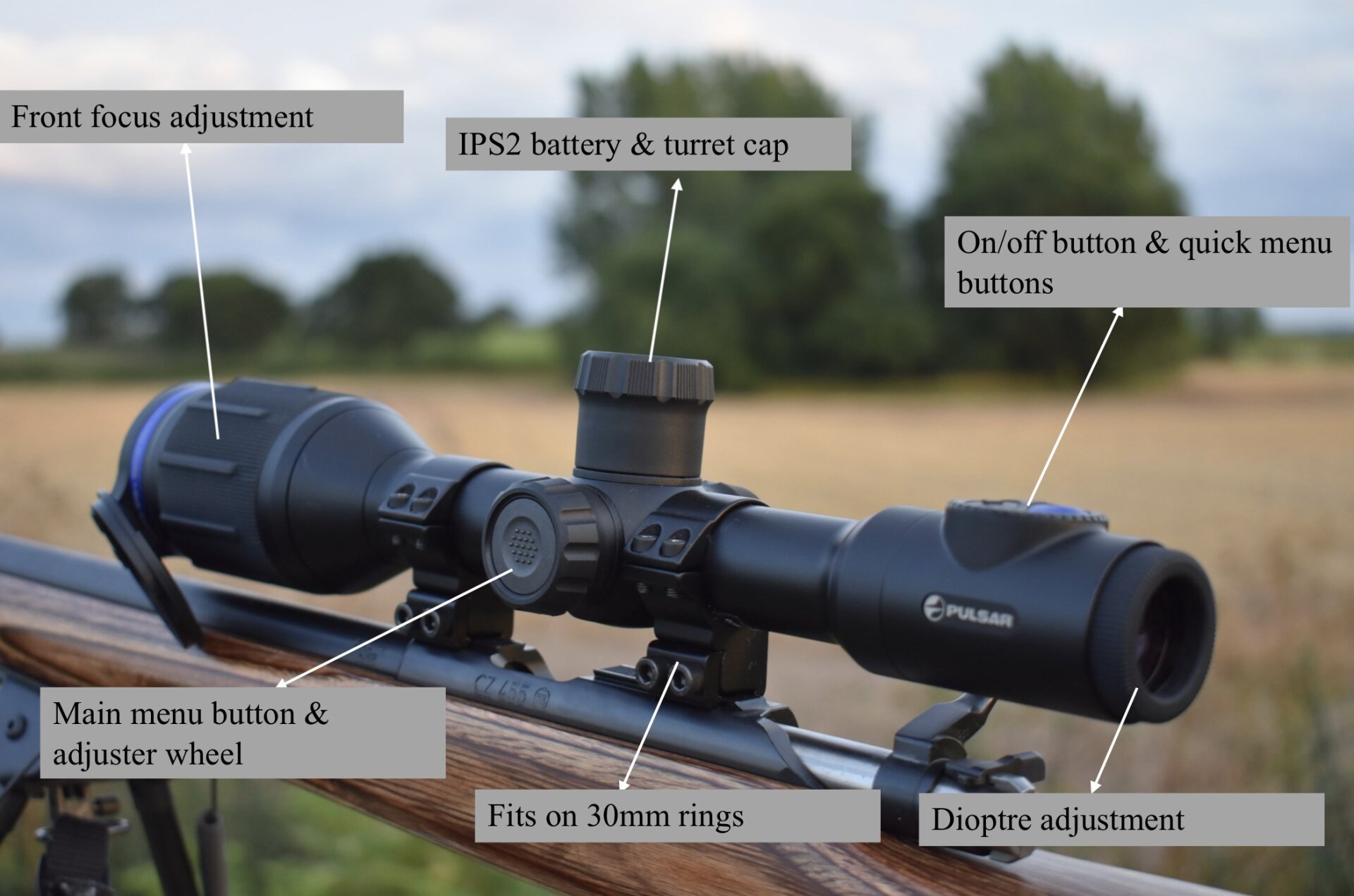